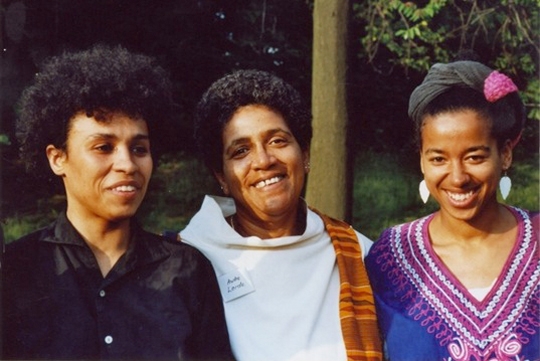 In 1992, exactly twenty years ago, the famous African-American poet and author Audre Lorde died , according to a much-quoted self-description "lesbian, feminist, black, poet, mother, fighter". In the 1980s Dagmar Schultz , who at the time was at the John F. Kennedy Institute at the Free University of Berlin taught Lorde to Berlin as a visiting professor. A step that had a lasting impact. Lorde became a mentor and co-founder of the Afro-German movement. In her cinematic portrait, Dagmar Schultz uses partly never shown and very personal material by Lorde and shows it in the circle of her Berlin friends, companions and students, of whom she encouraged quite a few to write.They became poets and scientists to whom the first German-language work on African-German history and racism was owed. You can hear and see: May Ayim , Katharina Oguntoye , Gloria I. Joseph, Ilona Bubeck , Traude Bührmann and Gloria Ika Hügel-Marshall and Ria Cheatom, both of whom also worked on the film.

Dagmar Schultz, born in Berlin, Germany, first studied at the Free University of Berlin and then studied and worked in the USA and Puerto Rico from 1963 to 1972.
Between 1963 and 1965 she studied at the University of Michigan at Ann Arbor Speech (directing and producing documentary films), journalism and theatre.

She was active in the civil rights movement and taught at Rust College in Holly Springs, Mississippi, in 1965. In Puerto Rico she worked in 1966/67 for the Anti-Poverty Programs of the Office of Economic Opportunity. She then studied at the University of Wisconsin at Madison where she received her doctorate in 1972 with a dissertation on labour education. From 1969 to 1970 she taught seminars on women's studies and race and class at Columbia College in Chicago and was active in the women's movement.

In 1973 Dagmar Schultz returned to Berlin. She taught at the John F. Kennedy Institute for North American Studies at the Free University of Berlin until 1986 and habilitated at the Sociological Institute of the FU in 1989. From 1991 to 2004 she was a professor at the Alice Salomon University of Applied Sciences for Social Work and Social Pedagogy. In 1974 she was co-founder and until 1981 staff member of the Feminist Women's Health Center Berlin.

Also in 1974, she was co-founder of the women's self-publishing house, later sub rosa Frauenverlag, and from 1986 Orlanda Frauenverlag, which she managed as publisher until 2001. Her teaching and research focus was on intercultural and anti-racist social work, women's and gender studies, as well as political and cultural competence in the psychosocial and psychiatric care of migrants and minorities.

Dagmar Schultz organized reading tours in the USA for her partner Ika Hügel-Marshall (Daheim Unterwegs. Ein deutsches Leben). She is co-producer of the film Hoffnung im Herz. Oral Poetry - May Ayim". In 2012 her documentary film about Audre Lorde and the times she spent in Berlin had its world premiere at the Berlinale. With this film she travelled together with Ika Hügel-Marshall in Europe and the USA and with Dr. Marion Kraft in the USA and Canada (see the film's website www.audrelorde-theberlinyears.com)

Dagmar Schultz is a passionate photographer (see photo gallery). Her plant photos and others have been published on book covers by Orlanda. She has/has photo exhibitions in Berlin. Her photos of Audre Lorde have been exhibited in Berlin, Bologna and Sarajevo.