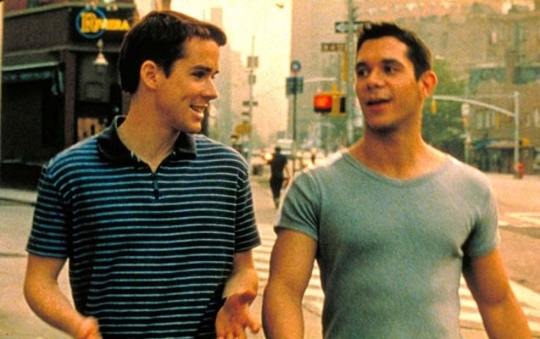 Gabe and Mark aren't asking for much - just a simple one night stand. All they need is a place to seal the deal. Sound easy? Not when your neurotic best friend is trying to revive a dying musical career off-off-off-Broadway, your cabaret singing co-worker has just broken up with his boyfriend of seven years and the entire city seems set for a nervous breakdown. It's one chaotic event after another as these two hopeful romantics try to stop the city so they can get off!

Jim Fall has had a diversified directing career spanning theater, TV, and motion pictures. Jim's feature film career started with the acclaimed independent feature "Trick" which premiered at the Sundance Film Festival and Berlin Film Festival in Dramatic Competition. It was quickly acquired by Fine Line Features and released in the summer of 1999 becoming Fine Line's highest-grossing film of that year. Jim's studio directing debut, "The Lizzie McGuire Movie" - a big-screen adaptation of the hit Disney Channel series starring Teen Queen Hilary Duff - was a big box office success for Disney, opening at number two below "X-men 2" its opening week.