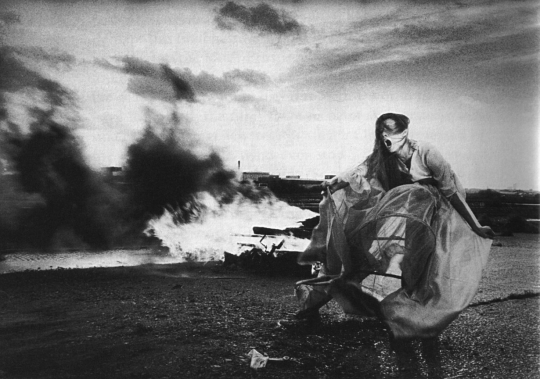 The Last of England

It is a poetic, rather than realistic, depiction of what Jarman felt was the loss of traditional English culture in the 1980s. It is named after a painting by the Pre-Raphaelite artist Ford Madox Brown.
Jarman wrote a book to accompany the film, which deals more explicitly with the relationship he had with his father, who was a Lancaster bomber pilot in the Second World War. Jarman used the impact of his father's despair, depression and violence on his own artistic vision. The depression that his father suffered is attributed to the high number of fatalities that bomber crews experienced and the carpet-bombing of civilians. The film is also a means to explore his vision of the dissolution of traditional (pre-war) English life. (See his earlier film JUBILEE to contextualize it with the 1977 punk movement of the time).
(Wikipedia)

Born 1942, died 1994. Studied painting and worked as a costume and set designer for the Royal Ballet. Worked as a set designer on Ken Russell’s 1970 film THE DEVILS. Made numerous short films before directing his first feature, SEBASTIANE, in 1976. His first film to screen at the Berlinale was THE TEMPEST in 1979. In addition to his subversive period dramas and experimental films, he began directing avant-garde music videos in the 1970s. He was also a committed campaigner for gay rights in Britain.