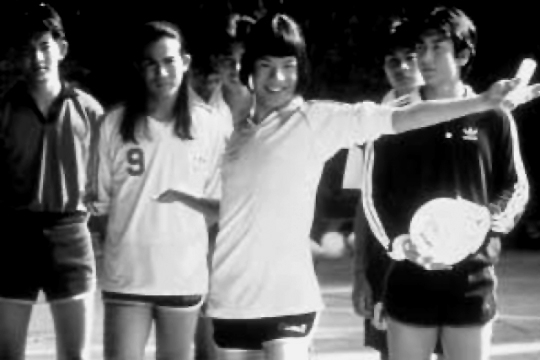 Mon is a fantastic volley ball player but, because he is homosexual, he can’t seem to find a team willing to take him on. His best friend, Jung, has gone through the same sort of experiences, but remains optimistic.They sense a new opportunity when the local government appoints Bee as the new chief coach, giving him instructions to put a new, winning team together. Bee organises test games but. as soon as he selects Mon and Jung, many of the other players drop out again in protest. Bee refuses to be browbeaten by this and offers Mon and Jung the chance to find other players themselves. And so these two set about putting together their own team, comprising Nong, a gay sergeant; Pia a trans-sexual cabaret star and her lover, Chat. Wit, the only son of Thai-Chinese parents who haven’t a clue that their son is drawn to men, is the final team member. Slowly but surely, the team begins to gel and, before long, they are able to show what they’re made of. After doing excellently in the heats, they must now start training for the finals – and the chance to win the national title. The derision and sneering remarks that they find themselves up against from all sides prove to be a tough challenge, both for the players as well as their coach, Bee. But then, the great day of the championship dawns . . .

This film is based on the brilliant victory of a gay volleyball team at the Thai National Volleyball Championship in 1996.

Yongyoot Thongkongtoon, born February 18, 1967, is a Thai film director, producer and screenwriter. He made his debut in 2000 with the sports comedy The Iron Ladies. Yongyoot Thongkongtoon graduated from Chulalongkorn University, Faculty of Arts, in Bangkok. His debut feature in 2000 was The Iron Ladies, a fact-based sports comedy about a volleyball team of gay and transgender men. The film won several awards in Thailand and at film festivals, including the Thailand National Film Association Awards and a special mention Teddy Award at the 2001 Berlin Film Festival. Yongyoot also directed the sequel, The Iron Ladies 2, in 2003.