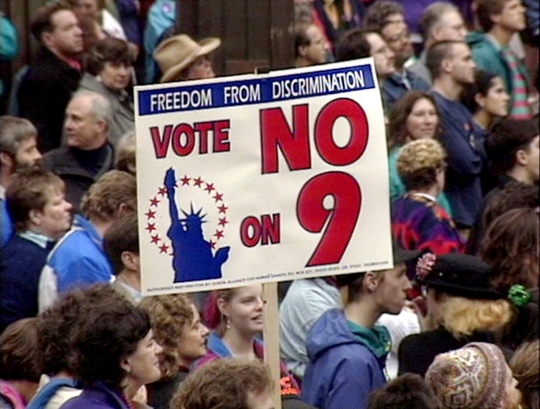 In 1995 BALLOT MEASURE 9 shocked movie-goers with its inside views of a divisive gay-rights
battle and with the unprecedented violence the campaign rhetoric provoked across the state of
Oregon - such that local activists, risking their lives, were given full-time police protection, slept
with guns under their beds, and on election night wore bullet proof vests. Families were torn
apart, neighbor set against neighbor.
Director Heather Lyn MacDonald ducks behind the headlines to bare the passions and strategies
that drove both sides. Culled from hundreds of hours of material shot over the 9 months leading to
the election, BALLOT MEASURE 9 tells a story of driving urgency.As the level of violence escalates,
the documentary acquires the tension and suspense of a fiction film.
Sponsored by the Oregon Citizens Alliance , Measure 9 was intended to revoke and prevent civil
rights protections for homosexuals (or those perceived to be gay), and to mandate that schools
teach that homosexuality is "abnormal, wrong, unnatural and perverse." Lon Mabon , head of the
OCA, called it "a simple battle between good and evil". Inflammatory newspapers were dropped
on every Oregon porch, claiming, among other things, that homosexuals recruit children to their
addictive lifestyle and are 90 times more likely to be pedophiles .Statewide, a virulent discourse
resulted, and in this climate came the inevitable rise of anti-gay harassment, physical attacks and
murder. The newly formed bias crimes unit tracked a 500% in anti-gay violence in Oregon that
year.

BALLOT MEASURE 9 is the chronicle of what happened in Oregon during a particularly bitter battle over an anti-gay initiative promulgated by the Oregon Citizens Alliance during the Clinton / Bush presidential race. With Colorado, Oregon was one of two test cases in 1992 for statewide referenda by conservative “family values” groups attempting to amend state constitutions to prevent and revoke laws which protect lesbians and gay men from discrimination. The Oregon Citizen Alliance's Measure 9 went further, tying homosexuality to pedophilia and sadomasochism, stating it was “abnormal, wrong, unnatural and perverse,” and mandating that schools and government agencies teach it to be such.
(Toots Crackin Productions)