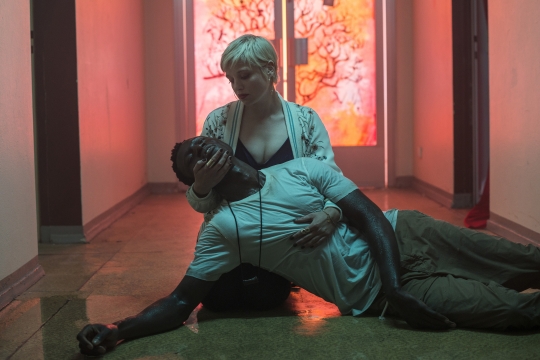 Francis has survived his escape from North Africa. When he wakes up on a beach in the south of Europe, he is determined to live a regular, decent life from now on. But he winds up in present-day Berlin where a stateless person without a work permit is treated just as mercilessly as the labourer Franz Biberkopf in Döblin’s classic novel of German modernism. Francis initially resists an offer to deal drugs in Hasenheide park, but then comes under the influence of Reinhold, his neurotic, sex-addicted pal who takes him in. When Francis meets club owner Eva and, after several dramatic experiences, the escort girl Mieze, he feels he’s found something for the first time, something he’s never known before: a little bit of happiness – which is precisely what Reinhold begrudges him.

Like the literary sourcematerial, this contemporary version of Berlin Alexanderplatz is also about society and outsiders, desire and travesty. Not unlike Fassbinder’s version, Qurbani’s epic is a gloomy journey through the “dark night of the soul” – not least on account of its authentic, atmospheric images of Francis’ city of exile: Berlin.

Born in 1980, his parents fled Afghanistan as victims of political persecution in 1979 and came to Germany. His father’s work in the US army meant he grew up in various German cities. After gaining experience at the Staatstheater Stuttgart and the Stadttheater Hannover, he took up a degree in fiction directing at the Film Academy Baden-Württemberg in 2002. His graduation film, Shahada, screened in the 2010 Berlinale Competition; his second feature, Wir sind jung. Wir sind stark., opened Rome Film Fest as well as Hof International Film Festival in 2014. Both films won several awards.