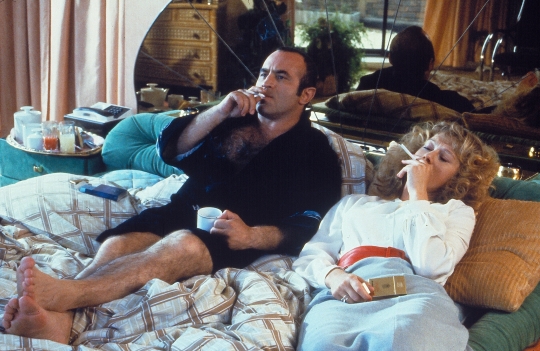 Cockney gang boss Harold Shand wants to go legit and make London the “capital of Europe” by building an Olympic stadium in the Docklands. He is hoping to persuade the New York mafia to invest in the venture. But no sooner have its representatives arrived before Harold runs into problems. Two members of his gang have been murdered and he himself is almost killed by a bomb. To save face with the Americans, he needs to find the culprits right away – and he’s not squeamish about how he does it…

Behind every successful man is a strong woman. In this case, she’s Helen Mirren. In The Long Good Friday, she eschews playing Victoria as a typical eye-candy gun moll in favour of embodying a self-reliant woman. When Shand starts to lose control over not only his business, but also himself, it’s Victoria who calls the shots. Helen Mirren had a great influence in how the role was written during script development. Just as the film almost prophetically envisions a reshaping of the urban landscape into a “new London”, Mirren’s portrayal provides a role model of a new image of women.