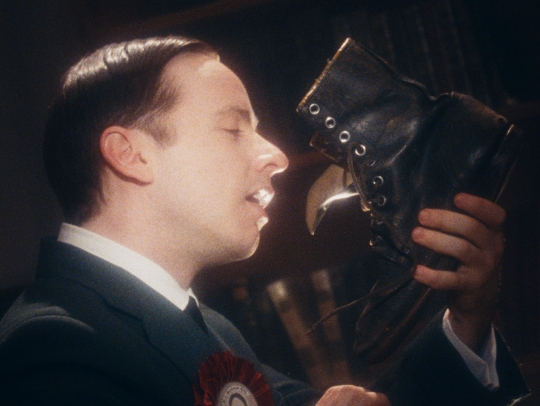 Toronto, 1899. The young William Lyon Mackenzie King is running for the office of prime minister. The satirical and anarchic fantasy biopic The Twentieth Century explores the tribulations of the young politician, who would go on to become a long-serving prime minister of Canada. Serious Oedipal conflicts, an obsession with worn shoes and anti-masturbation therapies make it difficult for the young Mackenzie King to pursue his calling. Driven on by his authoritarian mother, he stumbles through a claustrophobic world in the grip of a bitter winter in search of love.

Filmed on 16 mm and Super 8, director Matthew Rankin tells King’s story via a Guy Maddin-inspired aesthetic; there are numerous echoes of silent films, melodramas and the comic literature of the 1930s. Cardboard sets that are at once minimalist and expressionist create a dreamlike backdrop for gender bending and theatrical acting. This debut lays out Canadian history in cheerfully perverted fashion, including ejaculating cacti and an ice-skating finale in a labyrinth of mirrors.

Born in Winnipeg, Canada in 1980. He studied at the Department of History and Classical Studies at McGill University in Montreal, as well as Université Laval in Quebec. In 2011, Rankin participated at Berlinale Talents. Following numerous short films, The Twentieth Century is his first feature film.