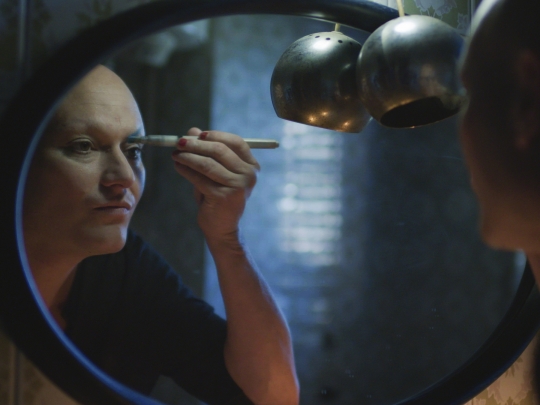 Throughout its 77 minutes, the film never once leaves the small Milan apartment of Bianca Dolce Miele, a dark safe space illuminated by the warm light of the occasional candle, with objects arranged with ritualistic intention and a black cat always on the roam. A map of the heavens hangs above the bed, the outside world is accessed via telephone. “I’m always here, any time,” she promises her clients in a deep, throaty voice. “Give me half an hour to put on something sexy for you.” Bianca’s appearances in this film are self-determined and withstand any kind of normative gaze. The punters and friends who come calling each bring their own understanding of Bianca and the role of her profession: one quotes from the Bible, another sings a murder ballad, a third sets up a pristine white table upon her ambiguously gendered body, from which he eats tinned meat. “Tenderness always tells of new things,” is one way to translate the line from Sandro Penna that serves as the film’s motto. For Bianca’s invitation into her world is primarily directed at those who can only tell their stories in that space.