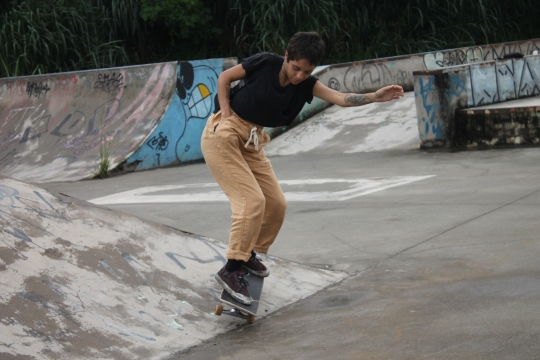 “You guys are awful. You don't even know the girl and the first thing you say is: ‘She's fucking hot.’ She's probably doing a whole lot of cool things you don't even know.”
Rolling through São Paulo on her skateboard, Baghdad wears her hair short, her trousers pulled up high, and her sweater tucked into the waistband. Baghdad is cool; she is a girl who respects whom she wants to respect – everyone else might find wet clumps of toilet paper hurled their way. She lives in a house of strong-willed, emancipated women and spends her days at the skatepark with a group of guys who like to hang around shirtless, playing cards and plucking their chest hair.

Just like her protagonist, the director glides and swivels through the film with free, easy confidence and swaggering originality, not shying away from darker issues like violence, sexism and discrimination – yet also celebrating solidarity and resistance.

A director, screenwriter and producer born in São Paulo, Brazil in 1979. Her debut feature De menor premiered at the San Sebastian International Film Festival before going on to win Best Film at the Rio International Film Festival. She has directed two mid-length documentaries for the Brazilian channel TV Cultura and ten episodes of the documentary TV series Causando na rua for CINEBRASiLTV. The development of her second feature film Meu nome é Bagdá was supported by the Tribeca Film Institute and the Ibermedia programme.