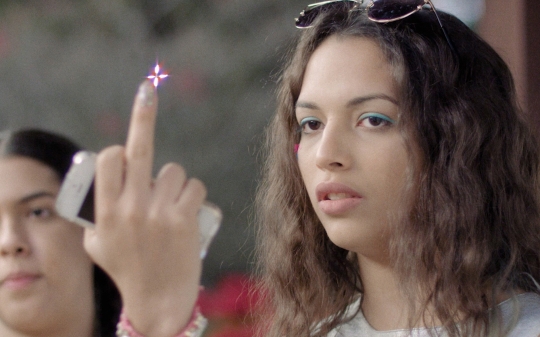 “So folks, you know me as Alice Júnior. I’m trans, hard to beat, and ready for whatever there is to be.”

Fast-moving cuts set to pop samples and sound effects, a hint of glitz and a bagful of emojis. Alice Júnior is producing her latest YouTube video about the long-awaited first kiss. But when her father walks into her bedroom and announces in front of the camera that they will be leaving the vibrant Brazilian city of Recife and moving to a small, conservative town in the south, Alice has to prepare herself for the prudery and small-mindedness she will confront there. The transgender teenager, played by the blogger Anne Celestino, doesn't let the initial hostility get her down. With her dazzling personality, the self-confident and charismatic Alice makes her new schoolmates and teachers rethink their conservative Catholic ways.

Born in Guarapuava, Brazil in 1979, he is a screenwriter, director and producer whose work focuses on human rights issues, especially the empowerment of minorities, gender equality and the LGBTQI* universe. As co-owner of Beija Flor Filmes, he has produced several short films that have screened at a total of 172 international festivals and won 35 awards and eight special mentions. He has also taught production and directing at the College of Arts of Paraná.