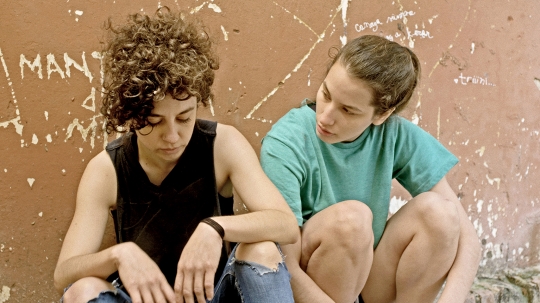 Clad in sportswear, 17-year-old Iris dribbles her basketball through the wide courtyards of her social housing estate somewhere in Argentina. She has been expelled from school and spends the warm days and nights with her two best friends – her cousins – in cramped rooms, fiddling with her mobile phone, or on the empty streets of the town. While playing hide-and-seek, the boys disappear with other boys, they strip off in front of the webcam and write passionate texts in which they rail against a heteronormative society. There is a deceptive lightness in the air and the promise that, when it comes to love and sex, anything is possible. When cool and selfconfident Renata enters the scene, Iris is fascinated, and it is not long before they begin flirting. But on the estate, the rumours about Renata’s past are getting louder and louder.

Describing a world where her protagonists are caught between coming out and cyberbullying, community life and poverty, love and violence, director Clarisa Navas captures the transition between the tenderness of childhood and the bitter reality of the adult world in floating images that often have a distinctly documentary feel.

Born in Corrientes, Argentina in 1989. After studying art at the Universidad Nacional de las Artes, she made her feature film debut with Hoy Partido a las 3 which screened at festivals including in Buenos Aires, Biarritz, Lima and Valladolid and won a number of awards. She has written and directed several series and documentaries for Argentine television and teaches at the Escuela Nacional de Experimentación y Realización Cinematográfica (ENERC) and the Universidad Nacional del Nordeste.