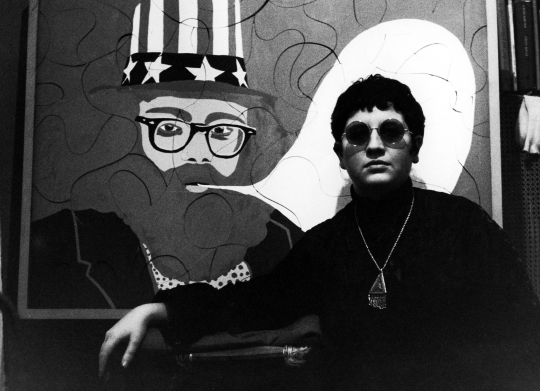 From a topographic perspective, Ulrike Ottinger’s cinema is mostly located between Berlin and remote places in the Far East or the Far North. In Paris Calligrammes, she explores the landscape of her memories of the city that she called home for 20 years and that helped shape her beginnings as a painter and filmmaker. Ottinger moved to Paris in her twenties and immersed herself in the cultural scene of the 1950s populated by heroes of the avant-garde and a new generation of artists and intellectuals. Meandering between bookshops, concert halls, theatres, cinemas, museums and cafés, Ottinger presents her personal pantheon, and at the same time maps a decisive era both in art – as Dada and Surrealism gave way to Situationism and Pop Art – and in politics where, in-between post-war hopes, the Algerian conflict and the student movements of 1968, there was much to discuss. Nonetheless, the film maintains its intimate stance throughout, assembling a rich and emotionally charged repertoire of film clips, news reports, photos and songs with the same meticulous affection that people used to stick newspaper clippings and photos in a diary so they could write around them.

Born in Konstanz, Germany in 1942. She worked as a painter and photographer in Paris from 1962-1968. She founded the “Visuell” film club in Konstanz in 1969, and led it until 1972; she also founded “galeriepress” art gallery and press. She has lived in Berlin since 1973. Alongside her film work she also produces operas and theatre and is present on the international scene with photo exhibitions.