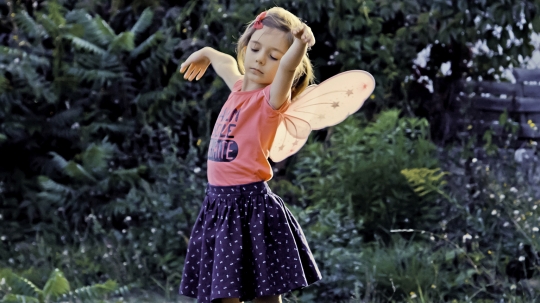 When she grows up, she will be a girl. This is something Sasha has dreamed of since childhood. Her family soon realises how serious she is. In addition to interviews with the parents, who acknowledge their daughter as such without hesitation, the film depicts the family’s tireless struggle against a hostile environment as well as their everyday lives. We see Sasha at play, practising ballet and during a visit to a therapist specialising in gender identities. At school, Sasha is not allowed to appear as a girl but must wear gender-specific boys’ clothes.

Tenderly filmed images and close-ups of Sasha’s face create a gentle intimacy. Sometimes, it is as if she does not understand why everything is so complicated and why she cannot simply be what she is and wear what she wants.

Two-time Teddy Award winner Sébastien Lifshitz paints the touching portrait of an eight-year-old who questions her gender and who, in doing so, provokes some disturbing reactions from a society still stuck in a biologically deterministic boy-girl way of thinking.

Born in Paris, France in 1968, he studied history of art and worked in the world of contemporary art before turning to film. In 2000 he scored an international theatrical hit with his debut feature film, the coming out story Presque rien. His first feature-length documentary, La traversée, premiered in the Directors’ Fortnight at Cannes. His films have already screened three times in the Berlinale Panorama: in 2004, his feature film Wild Side won the Teddy Award; Plein sud screened in 2010 and his documentary, Bambi, in 2013.